Fraud and scams happen all around the world – there was over 260 million scams across the globe in 2021, and total losses added up to around €41.3 billion – 15% more than the previous year.

But which country is targeted the most by scammers?

We gathered the data to find out which countries are targeted and lose the most money to scams, as well as those who do not see as many or lose as much money to them.

Read on to find out which countries have seen the biggest increases and decreases in scams and why.

Brazil has the highest number of scams 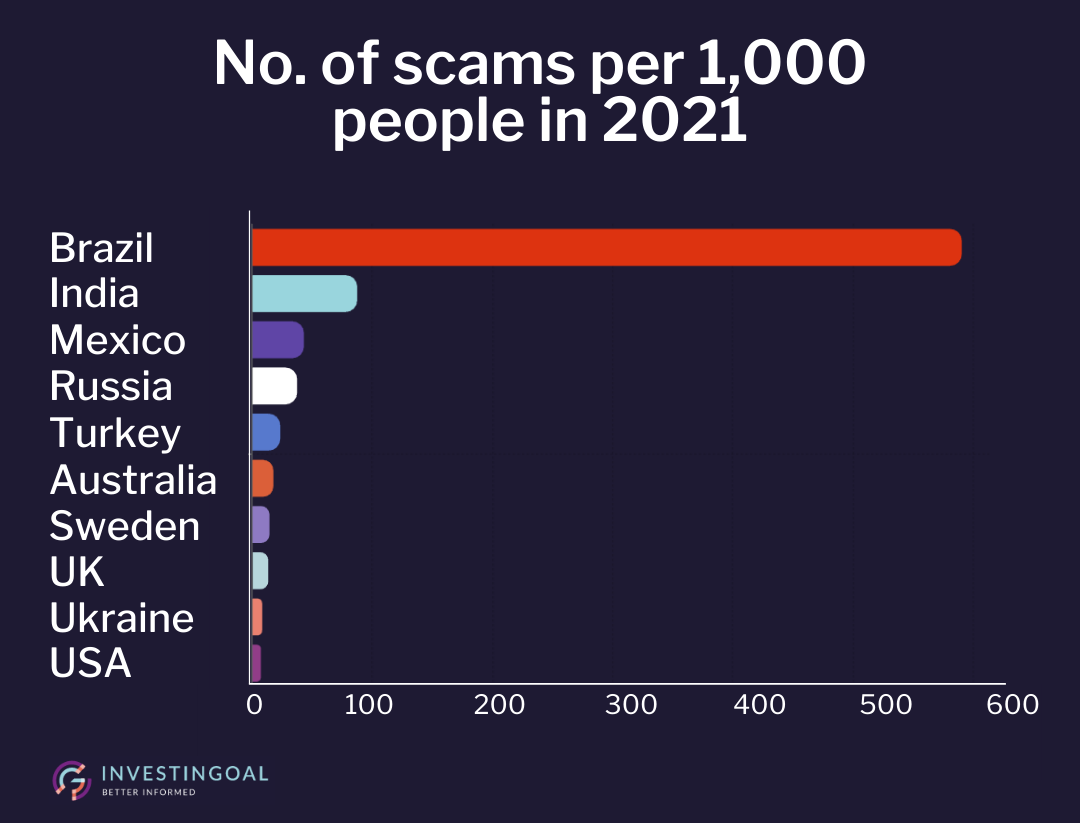 Between 2019 and 2020, Brazil saw its online fraud cases grow by 28%, and India saw a huge surge in scams during COVID-19 – credit card/banking scams were the most popular type of scam in India during this time.

The USA remains the main target for online scams.

India lost the most money to fraudsters 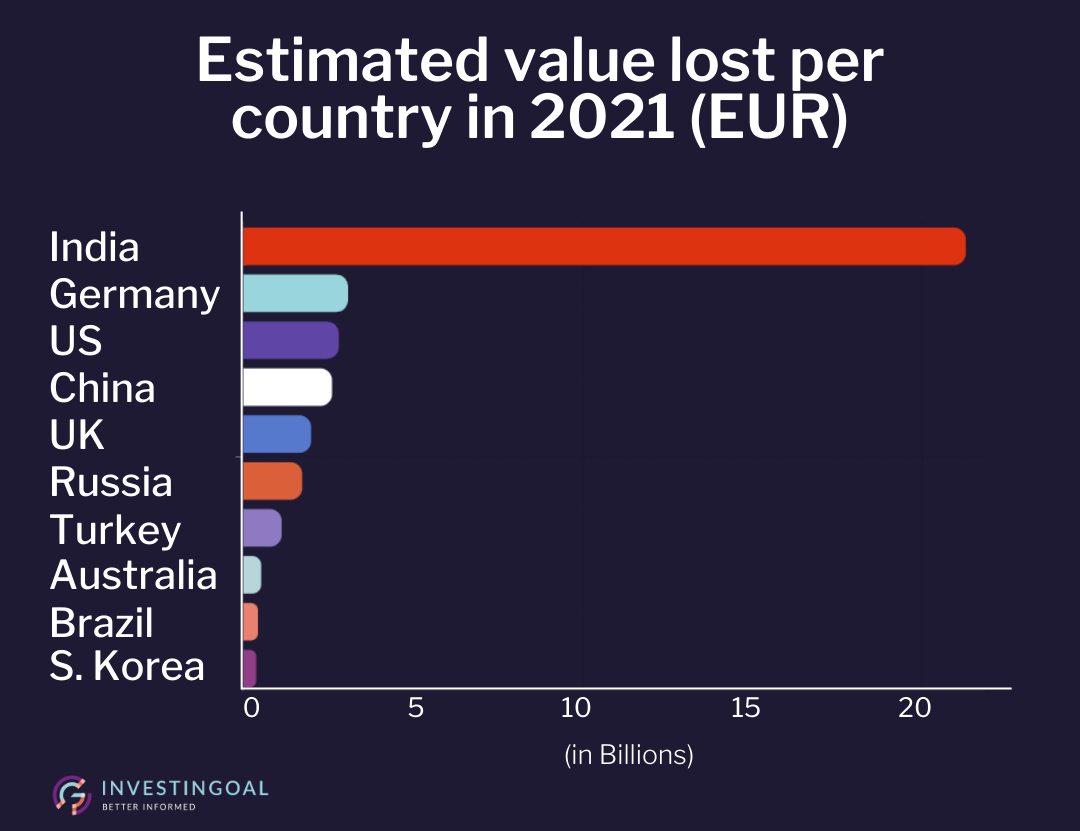 It was found that South Korea is being heavily targeted by crypto scams.

The USA remains the main target for online scams.

The Philippines aren’t targetted as often

Of all the countries that were researched, the Philippines appears to be the safest from scams, with zero scams per 1,000 people, and a total of 1,738 scams country-wide.

Portugal is also fairly safe for scams, however, they were targeted more than the Philippines, with around 0.1 scams per 1,000 people and 1347 scams in total. 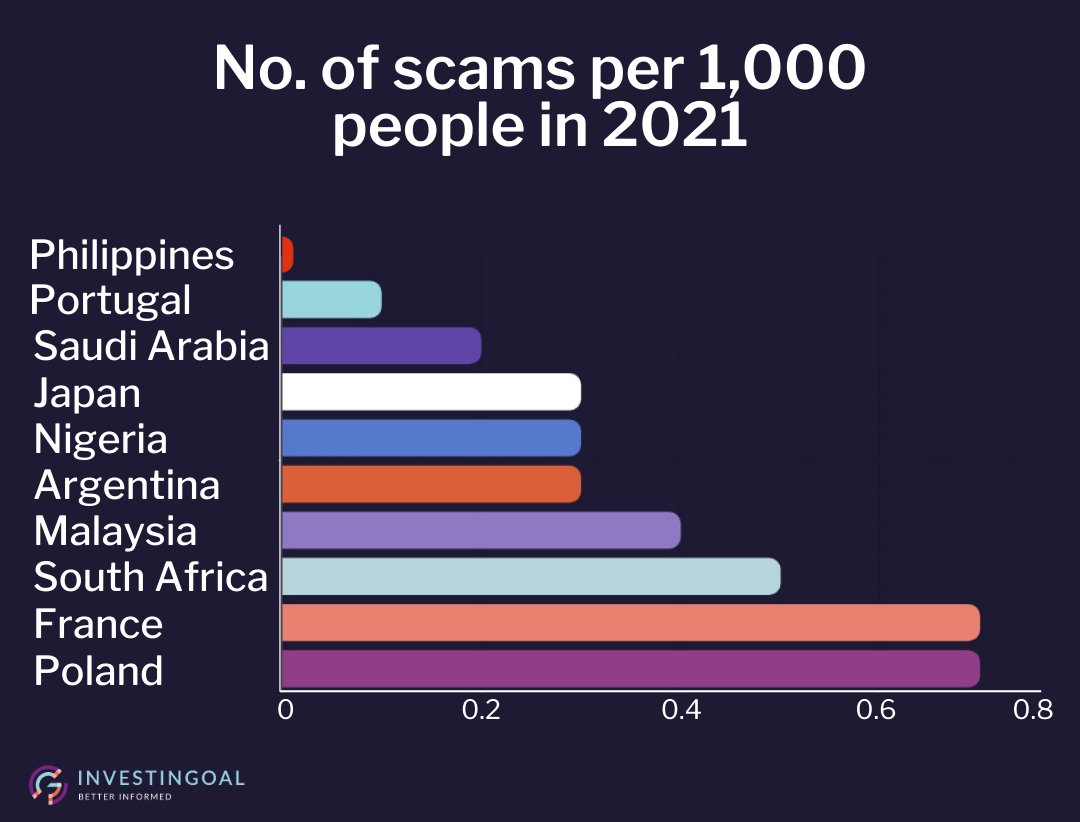 Saudi Arabia has recently been making an effort to fight cybercrime, and the fact they’re third on this list shows it’s paying off!

Despite still being on the ‘safe’ list, France has seen an increase in cybercrime, and Poland reported an increase in Phishing attacks, however, Poland is committed to expanding the cyber team within its police force.

Portugal lost the least amount of money to scams 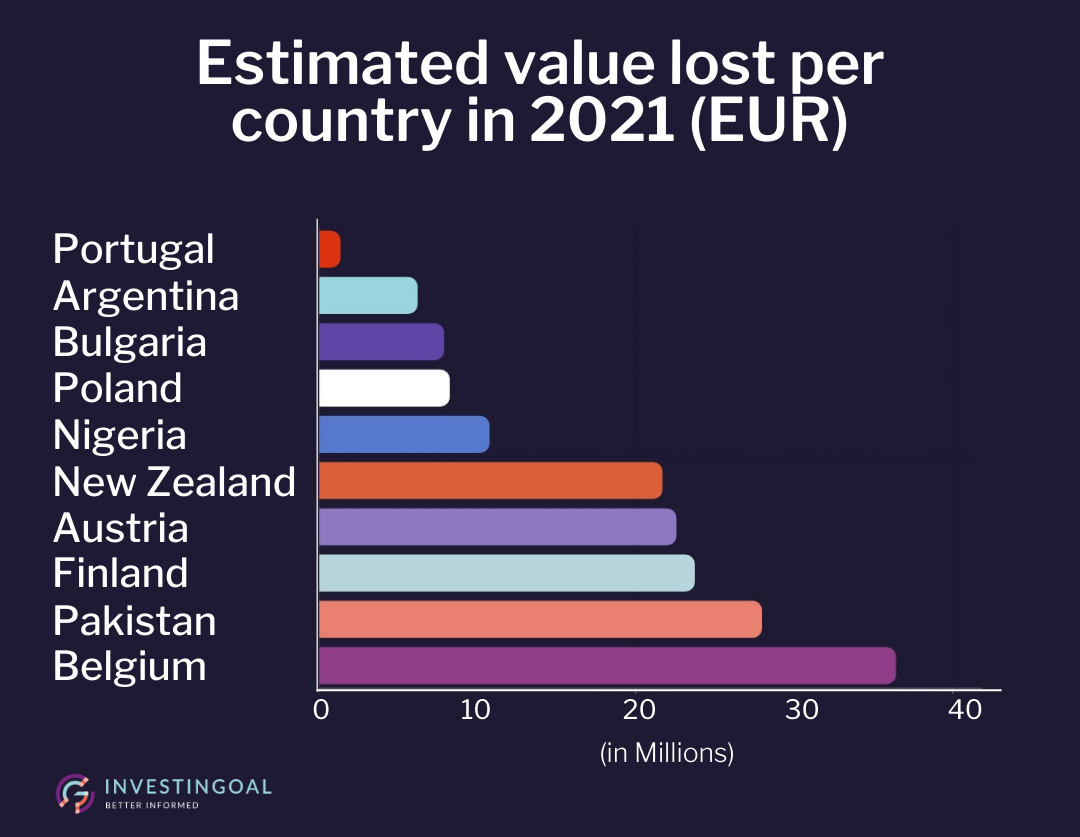 Despite the above countries losing the least amount of money to scams and remaining the safest countries from scams when compared to other countries, many of them have still seen an increase in scams due to the pandemic, including Argentina, New Zealand, Poland, and more.

In fact, the only country on this list that has actually seen a decrease in scams is Belgium.

We looked at each of these countries’ Gross Domestic Product value and worked out which countries lost the highest percentage of their GDP from scams. 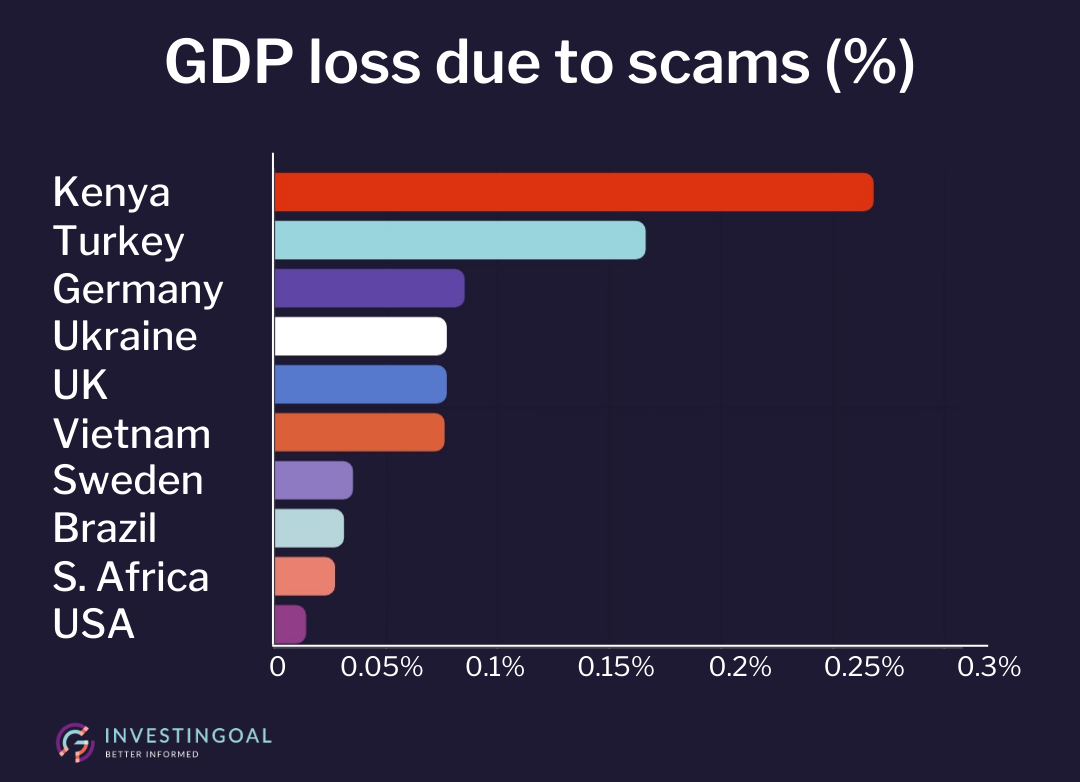 Kenya saw the biggest loss when comparing the estimated lost value to their country’s GDP, with a total loss of 0.3%. Turkey had the second-highest percentage loss at 0.2%.

The countries that have seen the biggest increase in scams

Despite many people being aware of scams, and many countries doing their best to prevent them, unfortunately, some countries are struggling with this, and the number of scams in 2021 increased a lot when compared to last year:

Interestingly, both Poland and Nigeria are in the top ten for the least amount of money lost to scams, and countries that have been targetted least, yet they have seen a high increase – Nigeria, in particular, saw a huge increase in scams during COVID-19.

India is the country which has lost the most money to scams and is also in the second position when it comes to the total number of scams – despite this, the number continues to grow, with COVID-19 also bringing a lot more scams to the country.

The countries that are handling scams

Whilst many countries are aiming to get these numbers lower by working with police forces or setting up websites and emails to advise and report scammers, there are a few countries in particular whose efforts have really paid off and have seen fewer scams than they did last year, or a much smaller increase:

It’s great to see that countries are working on preventing scams, with both Belgium and Japan seeing a decrease, despite them already being some of the safest countries from scams.

Japan in particular has really been fighting against scams – residents in Japan can actually earn money from scamming a scammer with a crime-fighting program named ‘Pretend to be fooled.’ The program asks people who have been contacted by someone claiming to be a family member or friend in need of cash to notify the police – the potential victim and police then work together to catch the scammer, and the targeted victim later receives 10,000 yen (€77.50).

Trading scams are also on a rise

As we have already illustrated in other investigations, this type of scam is on the rise, mainly affecting those who want to invest in the forex and stock market, but have little experience and knowledge about how to get started.

From 2009 to 2021, more than 14,000 fraudulent activities related to the investment world have been reported internationally.

With the popularization of trading, cryptocurrency investing, and gurus promising unrealistic gains, this trend is only expected to increase.
To find out more about the most popular types of trading scams, and some helpful tips on how to spot and avoid scams, as well as what to do if you do fall victim, check out this article. 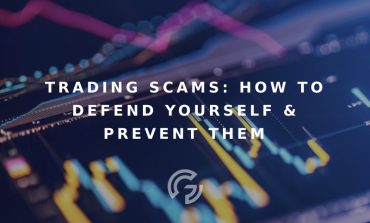 10 Worst Trading Scams And How To Avoid Them 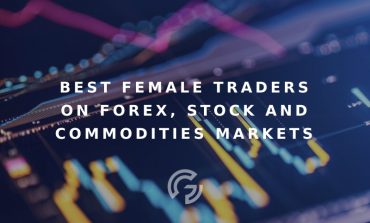 Best female traders to follow and learn from in 2022 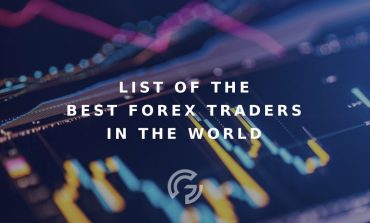 World best forex traders to follow and learn from